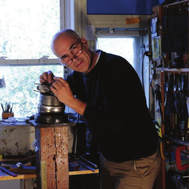 Master Engraver Geoffroy Gournet was born in Rethel in the French Ardennes in 1959. He has become a US Citizen, since coming to the United States in 1985. He has a great appreciation for art in general and is a collector of eclectic items. Geoffroy was the son of a reputed surgeon who practiced engraving as his hobby . Born in 1959 in France, Geoffroy Gournet graduated from the Belgian School of Gunsmithing in Liege, where he was awarded The First Prize of Basculage (Gunsmithing) for his work. During that time he spent a lot of time learning the techniques of gunsmithing under the direction of Ernest Dumoulin. Later, he earned an additional first prize at Liege's School of Engraving. Leaving Belgium for Italy, he was able to spend time in different workshops in Gardone Val Tronpia with such masters as Ceasare Giovanelli and Geanfranco Pedersoli.

While in Italy he met the Masters Julio Timpini, from Beretta, Giacomo Fausti and Giovanni Steduto both now of Creative Art. Giovanni Steduto took Geoffroy under his wing during those 4 months. Geoffroy was so eager to learn all the techniques of bulino that he worked 80 hours, 7 days a week. Geoffroy would like to take this opportunity too thank Cesare Giovanelli for giving him the opportunity to learn the art of bulino at his place known as the Bottega Giovanelli, as well as, heating the building during the long week-end hours that he worked there. The well-known English engraver Phil Coggan and Gary Merle were also students there at the same time as Geoffroy. Geoffroy became acquainted with Mr. Libero Feraglio “Ferlib” and started a very nice and friendly relationship with this great gun maker.

In 1985, after become a Master Engraver he came to the United States as an artist-in-residence in Virginia. In the summer of 1987, Geoffroy met Tom Skeuse Senior the father of “Parker Reproduction” and his great family. Geoffroy became the sole and full-time engraver at Parker Reproduction, where he worked exclusively on the custom A1 shotguns creating one of a kind works. He embellished the A1 Custom shotguns with everything from English scrolls to gold inlay to theater masks to farms scenes to wonderfully detailed hunting scenes. At the same time, Geoffroy was also working for his private customers, engraving shotguns, knives, jewelry, and other engravables. He worked for the New Jersey based company from 1987 until 2002. He is now a freelance engraver, he lives in Easton, PA an hour and a half from New York City (65 miles), and he has lived there since 1989. Geoffroy enjoys bicycling and uses it as a means to relax.

Geoffroy Gournet only uses the traditional methods of engraving; he does not use machines or chemicals in any of his works. The techniques used in his engraving involve the hammer and chisel and the Italian traditional bulino. For the deeper cuts a hammer and chisel are used. The bulino is a hand pushed point that creates very light lines, this is typically used for the intricate details including but not limited to the scenes and shading. The hardness of the metal determines the extent of detail in his works, as hard metals allow small lines to be resistant to wear, while soft metals do not hold fine lines. Sometimes, Geoffroy inlays 24-karat gold in his works. Depending on the support of his work of art, the subjects of his work varies greatly, including, but not limited to, wildlife, landscapes, rural buildings, or man’s best friend. He works exclusively on custom orders. As his craft is time consuming, engraving some pieces can take up to three months of full-time work. 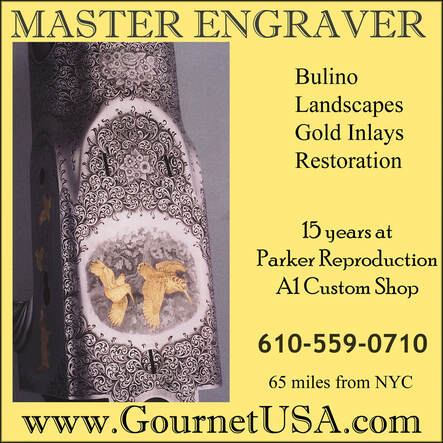